Aklavik, Place where one gets grizzly bear

Established on the Peel River in 1918, not far from the foot of the Richardson Mountains, Aklavik is the most westerly community in the NWT, with a population of approximately 735 people. 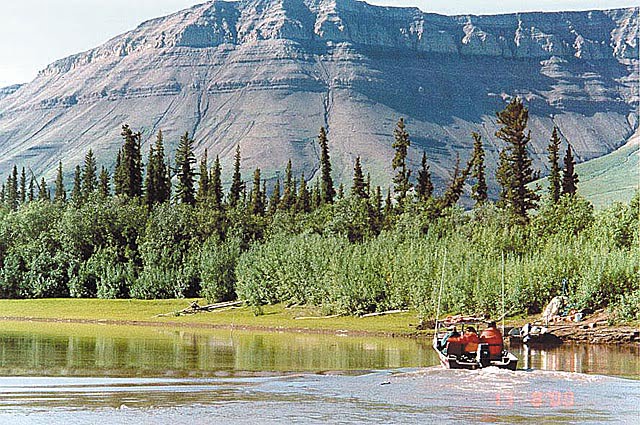 It has always been, and still is, a meeting place and home for both the Gwich’in and the Inuvialuit peoples. Many of the inhabitants still follow the traditional way of life – hunting, fishing and trapping. Aklavik was the trapping, trading and transportation centre for the Mackenzie Delta until the establishment of Inuvik, which was built to take over this function. But many residents of Aklavik refused to relocate and are now proud to call their home “the town that wouldn’t die”.

Twenty years after the tragic Lost Patrol incident, the RCMP were involved in another wild and frozen trek, this time in pursuit of the Mad Trapper of Rat River. No one knows for sure who Albert Johnson was or where he came from… only that a Mountie was shot at Johnson’s cabin while investigating other trappers’ complaints of pelt thefts.

The ensuing manhunt took 40 days and captured the imagination of a continent before the Mad Trapper died in a flurry of shots on the snow covered barrens of the Yukon’s Eagle River, over 100 km from Fort McPherson. He had covered hundreds of kilometres without provisions or a dog team and tested the Mounties to their limits.

This is the final resting place of Albert Johnson, the legendary
“Mad Trapper of Rat River” who made national news in the bitter winter of 1931-32.

It is also home to the Aklavik Fur Factory, producing designer fur coats, hats and mukluks. Air and river tours are available from Inuvik to Aklavik, where tours to the Richardson Mountains can be obtained. Be sure to make it to the visitor centre for a full list of activities.