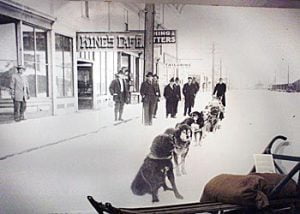 Dawson City’s remote location and long, cold winters meant that working in Dawson during the early 20th century wasn’t for the faint of heart. Few jobs involved the same stamina and endurance in the face of hard conditions as mail carrying, which was done by dog sled. Ed Whitehouse and Percy DeWolfe were just two mail carriers whose legends continue to be told today.

In the late 1920s and early 1930s, Ed Whitehouse had the contract to carry the winter mail between Dawson City and Stewart Island using his sled. Whitehouse and his dog team carried up to 500 lbs (227 kg.) of mail from the main post office at Dawson to Stewart, then on to Scroggie Creek up the Stewart River – a distance of about 100 miles (161 km). On the return trip, the load was much lighter, consisting of letters and sometimes, bales of fur.

Five or six Alaska malamutes pulled the mail sleigh. For exceptional loads of up to 900 lbs (408 kg.) Whitehouse added extra dogs to his team. Whitehouse fed his animals a snack of dog biscuits at noon and at night, he gave each a meal of two lbs. (1 kg.) of dried salmon cooked up with cornmeal. Every night he brought the dog harnesses indoors so they would be soft in the morning.

Whitehouse never lost any mail and never lost a dog. On one occasion, his sled did break through the Yukon River ice. Whitehouse was saved by his dogs. They hauled Whitehouse and his sled out of the water, then pulled Whitehouse to the nearest cabin. According to Mr. Whitehouse, as long as you could crawl and get into that sleigh, the dogs would bring you home. A skidoo wouldn’t do that.

Percy DeWolfe was another famous mail carrier of the Dawson region. He came up to Dawson to seek gold in 1898, only to arrive broke and realize that the good claims were taken. He started a fishing business with his partner Pete Anderson, which brought them some success until 1910, when Percy got a contract to carry the mail between Dawson City and Eagle, Alaska. His job meant that he carried mail through all seasons, weather, and road and river conditions. In 1947, Percy DeWolfe braved -58°C temperatures to bring mail back from Eagle, Alaska. He risked his life several times to get the mail through: at one point when DeWolfe’s horses went through the ice, he managed to haul 20 bags of mail onto land before the sleigh went under.

Percy DeWolfe is still considered a hero of Dawson City, and each year the community commemorates him with the annual Percy DeWolfe Race, a dog-sled race that takes place between Dawson City and Eagle, Alaska. You can support the tradition by purchasing a letter to send via dog sled team to Eagle!