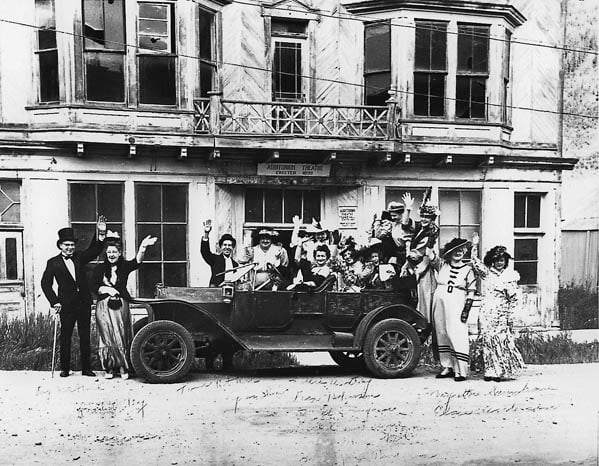 Town “Greeters” in front of Palace Grand Theatre circa 1952

History of the Klondike Visitors Association

In the 195Os, tourists who arrived in Dawson City on steamships were greeted by small groups of locals dressed in 189Os costumes. The Klondike Tourist Bureau, as it came to be known, wanted to give people a sense that they were entering a special place. The appearances were such a hit with the visitors that the group expanded its activities to include escorted tours of the town and the Klondike Gold Fields. Dances were held at the Palace Grand Theatre, or the Nugget Hall, as it was called. Gambling tables were set up and special play money was “minted” to keep visitors entertained.

The organization continued to grow, as did the number of visitors to the area. In the 1960s it became officially called the Klondike Visitors Association, and undertook a number of projects to promote Dawson City as a great place to spend a vacation. The casino nights were moved into the Arctic Brotherhood Hall, now known as Diamond Tooth Gertie’s. The casino was the first in Canada, and continues to be a major attraction in Dawson,