The territorial government contracted the White Pass & Yukon Route (WP & YR) to build a winter road from Whitehorse to Dawson in 1902. The company had the winter mail contract, and used its Royal Mail Service coaches to carry passengers, baggage and mail on the new Overland Trail.

The 330-mile (530-km) road was substantially shorter than the winding river route used in the summer by sternwheelers. It led past this point, crossing the Yukon River north of Carmacks. Horse-drawn stages traveled from 6 a.m. to 6 p.m. and took about five days to complete the trip.

WP&YR used wheeled coaches at the beginning of the season; sleighs were substituted when enough snow had fallen. Stages usually ran three times per week, although in the late winter there was almost daily service. 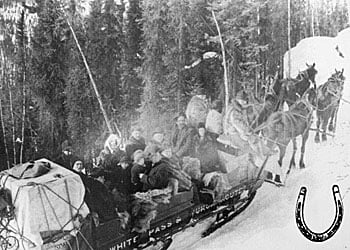 Stage drivers were called skinners and had names like “Dummy” Coghland, “Hard Face” Ned Reeves and Joe MacDonald “The High Priest”. They wore raccoon coats tied with a long red sash and soft buckskin gloves; when it was cold they sometimes held the reins with one hand and pounded the other hand against their shoulders to keep up the circulation. According to one traveler, passengers were expected to “carry enough overproof rum to keep the drivers happy with hot rums in the long evenings”.

White Pass employed as many as 275 horses in a season on the stage line. They were fed imported bran mash, oats and timothy hay – native hay wasn’t considered to have enough nourishment. Horses wore protectors over their chests and nostrils against the cold and had metal devices called caulks welded to their shoes for traction. Each horse had its number stamped on a front hoof and every horse had a name.

The one-way fare was a steep $125 and passengers paid extra for their meals and accommodation en route.

This log structure was built in 1915 and was used as a roadhouse until the 1950s. The kitchen and eating area were on the main floor and the bedrooms were upstairs. Two woodstoves provided heat. The inside of the building was lined with cheesecloth, both to lighten the dark interior and to prevent the moss and dirt chinking from falling into the rooms.

Staging posts were built every 20 or 30 miles (30 or 40 km) along the length of the Overland Trail. Each post was complete with roadhouse, stables, storehouses and cabins. Roadhouses were large two-story structures, often with an attached shed at one end, and were a welcome refuge from the cold. A stage would stop at two or three roadhouses in a day and horses were changed at each post. Passengers paid $1.50 for meals and $1 for a bed for the night.

The territorial government contracted the White Pass & Yukon Route (WP & YR) to build a winter road from Whitehorse to Dawson in 1902. The company had the winter mail contract, and used its Royal Mail Service coaches to carry passengers, baggage and mail on the new Overland Trail.