Alaska is the Yukon’s closest American neighbour to the west. It is the largest state in the United States by area, and the least densely populated.
With a population of 731,449 residents, Alaska’s population far exceeds that of the Yukon. Although the majority of Alaska’s population lives in Anchorage, the small communities of southeast Alaska have developed strong relationships with their Yukon neighbours as a result of a shared history and geographic ties.In 1867, the United States purchased the territory of Alaska from Russia. For the first few decades under American ownership, Alaska was governed by the U.S. military as a district. The only American settlers lived in Sitka, a coastal town in the Alaskan panhandle.When news of gold in Canada’s Yukon Territory reached the rest of North America, Alaska experienced a surge of newcomers. At a time when overland access to the Klondike was difficult at best, many prospectors from Vancouver, Seattle, and San Francisco chose to sail north on boats and start moving towards the Klondike after they landed in the coastal towns of Skagway and Dyea. Soon, Skagway filled with gold fever. Prospectors and miners crowded the Chilkoot Pass as they attempted to reach the Klondike.The Gold Rush created the need to assert clearer boundaries between Canada and the United States, and a border dispute resolved in 1903 set the modern boundaries that lie north of the Lynn Canal. The Gold Rush also spurred exploration and settlement elsewhere in Alaska, and, like Skagway, the cities of Fairbanks and Ruby owe their existence to the 1898 gold rush. In 1912, Alaska became an official organized territory, and later obtained statehood in 1959.Today, Alaska and the Yukon share more than just a border and a gold rush history. Close business relationships exist between the communities of Haines and Skagway and their Yukon neighbours, and the Alaska Highway,  which starts in Dawson Creek, BC and terminates in Delta Junction, connects Alaska to the lower 48 states. Because the Yukon provides the only overland access to Alaska, the two neighbours share an important tourism and transportation industry. Other important industries in Alaska today include resource extraction, oil and gas exploration, and fishing. 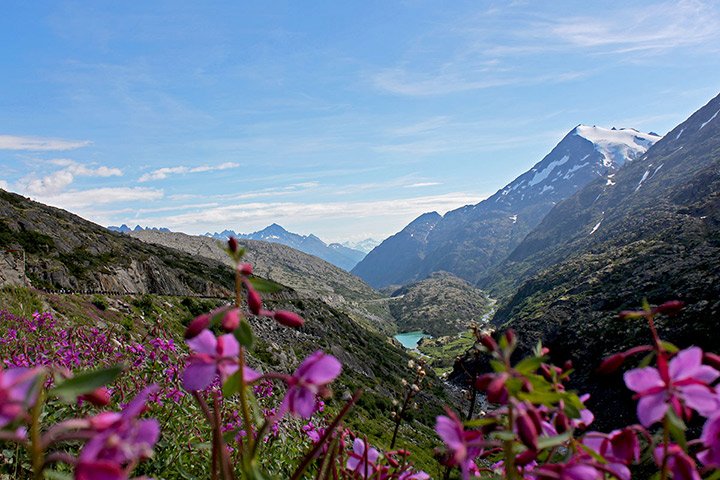