Dawson City is the heart of the Klondike Gold Rush! An incredible community that has preserved its past, Dawson City invites you to turn back the pages of time and experience our rich living history. Meander the wooden boardwalks and visit national historic treasures. Join interpretative programs and amazing special events. Tour the Klondike Gold Fields and try your luck panning for gold. YES! We still have operating gold mines. Participate in unforgettable First Nations tours and Wilderness Adventures. Spend a night on the town in one of the most entertaining communities of the North, home to Diamond Tooth Gerties Casino – Canada’s first legalized gambling hall. Without a doubt, you’ll need a week to see it all! 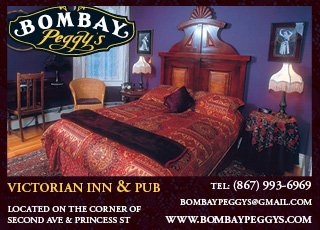 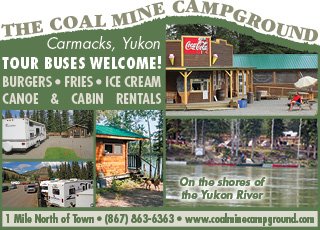 Click here for our virtual guide of Dawson City!

One ton of goods and a hard grind up the Chilkoot Trail got you into the Klondike. Gold seekers heading to the Klondike in 1898 were required to pack and carry their goods over the Chilkoot Pass. The list of supplies required for each man included 400 pounds of flour, 100 pounds of beans, and 100 pounds of sugar, to name just a few. The average man took about 40 trips to haul his ton of supplies 33 miles to Bennett. That’s 2,600 exhausting miles over the icy trail, up the golden stairs at the summit, through blizzards, and sub-zero conditions. Most gold-seekers took at least three months to complete the task.

Air North, Yukon’s Airline is the simple, comfortable and affordable way to reach the Yukon with scheduled jet service from Vancouver, Kelowna, Calgary,  Edmonton, Ottawa & Yellowknife – as well as frequent jet and turboprop flights between Whitehorse and Dawson City. Get the gold without the rush!

A comfortable six to seven hour drive from Whitehorse along the North Klondike Highway. You’ll enjoy rolling hills and river valleys. If you’re heading to Alaska, include Dawson in your itinerary by driving the Top of the World Highway, which connects to Tok.

Where to Stay in Dawson City?

Expect the unexpected while looking for a place to eat in Dawson City. The Klondike boasts some of Yukon’s greatest diversity in restaurants choices. All under the midnight sun. Dawson City Restaurants…

Are you one of millions holding a land deed to some prime real estate near Dawson City? Read the full story behind one of the most successful cereal promotions ever. More… 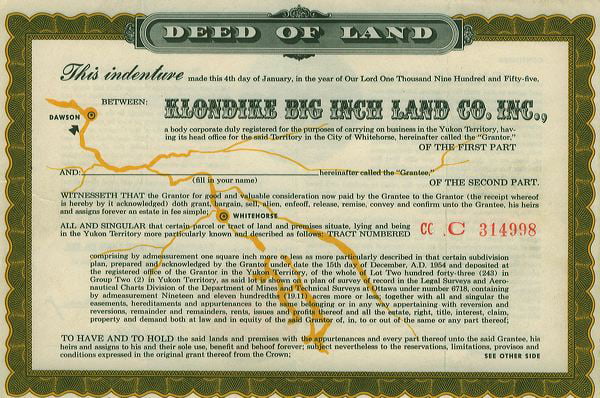 One million people, it is said, laid plans to go to the Klondike.
One hundred thousand actually set off and about thirty thousand made it. What was moose pasture and a fish camp to the Tr’ondëk Hwëch’in for many generations was transformed into a metropolis in 2 years.

Dawson grew slowly throughout the winter of 1897, but once the Yukon River thawed in May of 1898, boats arrived in the hundreds and pulled to shore at all hours of the day and night.

The Klondike Gold Rush was touched off by the August 16, 1896 discovery of placer gold on Rabbit (later Bonanza) Creek, a tributary of the Klondike River. Miners already on the scene staked every creek (or “pup”) in the Klondike River and Indian River watersheds, including the fabulously rich Eldorado.

Not until the middle of July, 1897 did the outside world learn of the strike, when some of the newly rich pioneers arrived by steamboat on the West Coast. The description
of “a ton of gold” in Seattle’s Post-Intelligencer triggered
a veritable stampede.

VICTORIAN ELEGANCE IN THE HEART OF DAWSON CITY

Your best choice for Motel & RV Park accommodations while visiting the Klondike!

The Place to stay while visiting Dawson City, Yukon!

We have the most amenities in Dawson City, with a knowledgeable, friendly staff to help you have a delightful visit. Whether you’re looking for super-clean rooms and facilities, a guest laundry, full services at your campsite, or more, we have it. 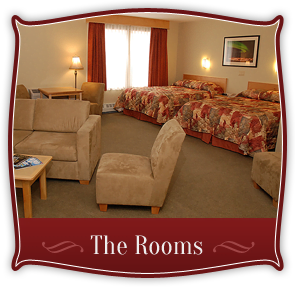 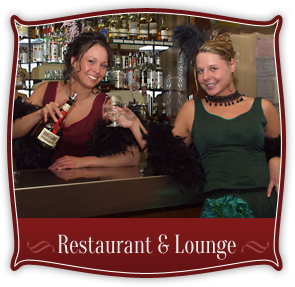 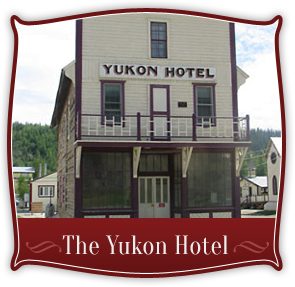 We are Northern Hospitality!

Where History and Hospitality Meet.

After a busy day exploring and adventuring, step into the luxury of your own private log cabin — where rustic elegance meets modern comfort. The only thing missing is…. you!
Kate’s is a seasonal business located in the heart of Dawson City, Yukon, home of the famous Klondike Gold Rush. After a long journey, check into one of our cozy, rustic cabins then relax on the deck and enjoy the moment. We speak English and French, and look forward to making your stay a truly northern experience.
We are closed for the season 2020 and are accepting reservations for the 2021 season.

After a busy day exploring and adventuring, step into the luxury of your own private log cabin — where rustic elegance meets modern comfort. The only thing missing is…. you!
We are closed for the season 2020 and are accepting reservations for the 2021 season.

Conveniently located hotel in downtown Dawson City, Yukon, home of the famous Klondike Gold Rush. Directly across the street from Diamond Tooth Gerties’s Casino, two blocks from The Palace Grand Theatre, walking distance to all Dawson City has to offer and a 10-minute drive from the airport.

We are a full service R.V. Park & Campground located 1 mile south of Dawson City, Yukon, Canada. Famous Bonanza Creek runs right through our park.
In addition, we offer tire repairs/sales, gas, diesel, propane, groceries, car/RV wash and so much more. Please go to our Services page for a complete list.

WE OFFER OUR GUESTS 4 cents / liter DISCOUNT OFF GAS & DIESEL

Dawson may be a small town, but its arts scene thrives with the help of Klondike Institute of Art and Culture (KIAC), the Dawson City Arts Society (DCAS), the Dawson City Music Festival (DCMF), and the northernmost art school in North America, the Yukon School of Visual Arts (SOVA).

The Tr’ondëk Hwëch’in is a Yukon First Nation based in Dawson City. The citizenship of roughly 1,100 includes descendants of the Hän-speaking people, who have lived along the Yukon River for millennia, and a diverse mix of families descended from Gwich’in, Northern Tutchone and other language groups. 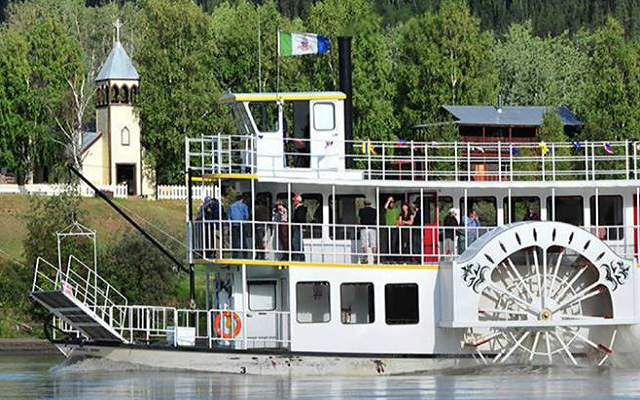 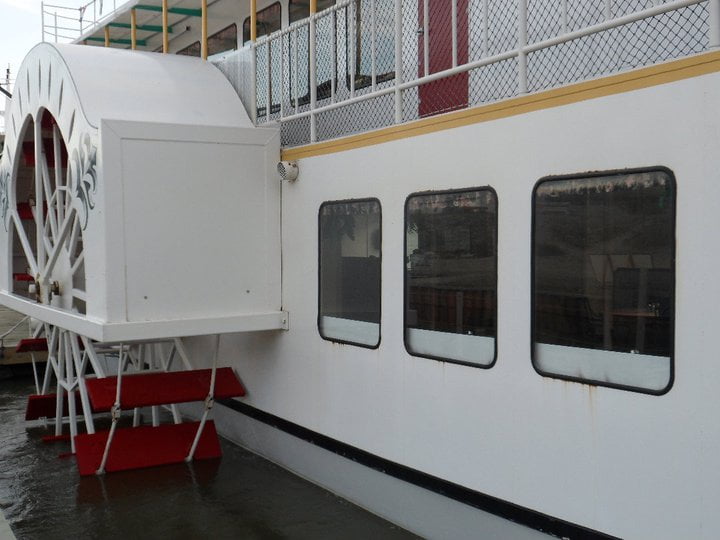 The Yukon’s best choice for public ground transportation between Whitehorse and Dawson City!

Husky Bus offers Yukoners and tourists regular, reliable passenger transportation and parcel service between Dawson City and Whitehorse, and everywhere along the Klondike Highway.
We specialize in the transportation of canoes, kayaks, and world adventurers! 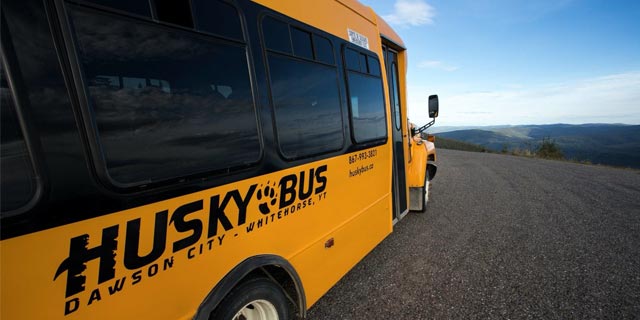 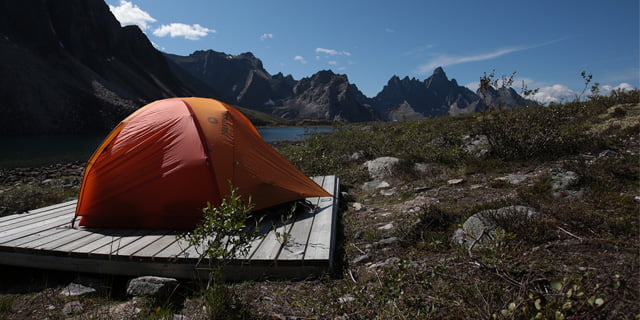 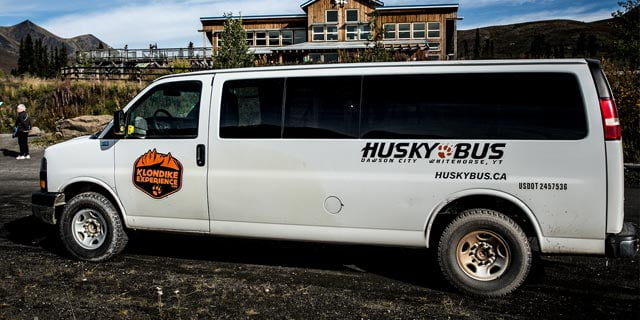 We’ve got an activity for that

Visitors are always stunned by the variety of activities available in Dawson City. For a small, northern town, Dawson has something to see and do for everybody. However long you’ve planned on coming, we assure you, it’s not long enough. In fact, we bet you can’t find a place in the Yukon that has as much to do in such a small area as our perfect, little town!
We have everything you expect to do in a northern town and more! Don’t believe us? Take a look at the listings below or better yet, stop by our visitor centre. As a guest in our town you’ll have a hard time packing it all in. We guarantee you’ll leave here wanting to visit again!

We’ve got an activity for that

Visitors are always stunned by the variety of activities available in Dawson City. For a small, northern town, Dawson has something to see and do for everybody. However long you’ve planned on coming, we assure you, it’s not long enough.

Trek Over The Top 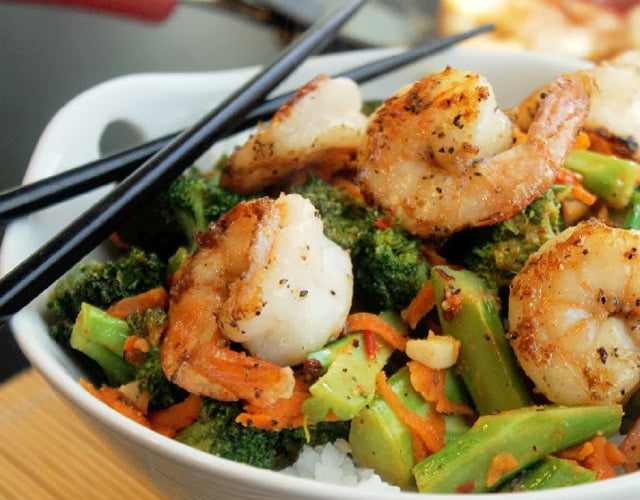 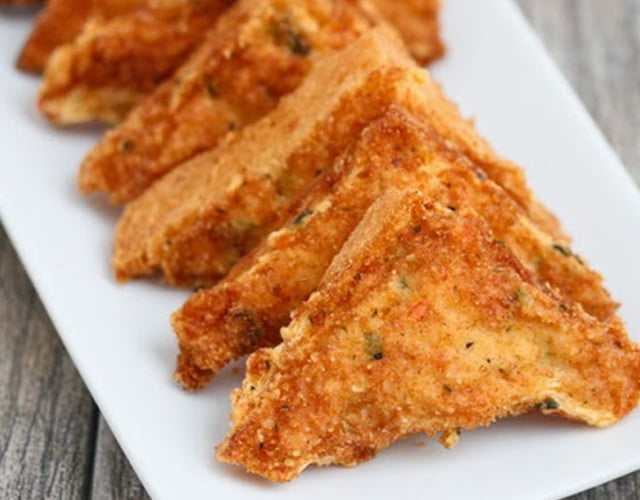 Our campground features 83 sites along with all the amenities you expect from a campground combined with our convenient downtown Dawson location that gives you easy walking access to all of Dawson's attractions, restaurants and shops.