The Yukon’s newest highway, it was begun in 1959 as Yukon Territorial Road No. 11. Later it was called the Flat Creek Road when it reached that far, then as it lengthened, it was called the Eagle Plain Road and lastly, the Aklavik Road. 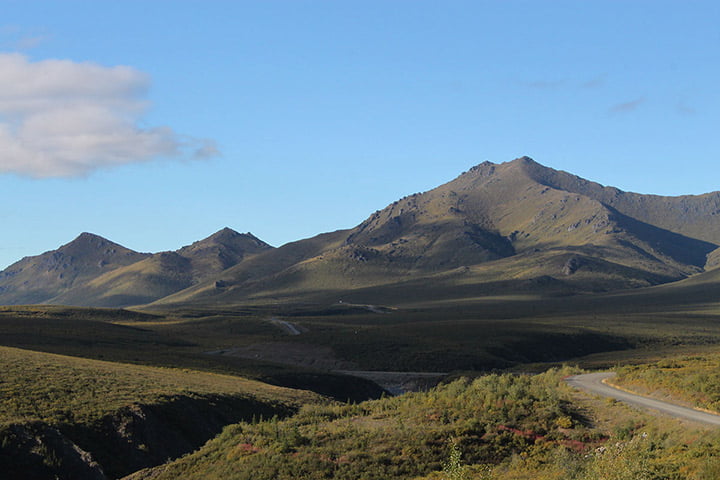 Leaving the Klondike Highway at Mile 26, east of Dawson, the road follows the Klondike River valley. There it turns north through the Ogilvie Mountains to the Blackstone River, crosses the Ogilvie River and on to the Eagle River which it follows until it turns east through the MacKenzie Mountains to Fort MacPherson and on to Inuvik.The Yukon Order of Pioneers, founded in Forty Mile in 1894 and active in honouring early Yukoners, proposed that the highway be named after Inspector W.J.D. DEMPSTER, RNWMP.The route of the highway follows roughly the track of the NWMP patrols from Dawson to Fort MacPherson, started in 1905. These patrols were always done in the winter with dog teams.Inspector F.J. Fitzgerald, Constables G.F. Kinney, Taylor and Special Constable Sam Carter left Fort MacPherson on 21 December 1910, on the return journey of this annual patrol. They went astray while trying to find the trail between Little Wind River and the Hart River. Running short of food, they decided to return to Fort MacPherson but owing to exhaustion and starvation they were unable to reach it. Kinney and Taylor died about 35 miles from Fort MacPherson while Fitzgerald and Carter died about 25 miles out.On 20 February 1911, when the patrol had not arrived in Dawson, Inspector Snyder, the officer in charge, being concerned, ordered Cpl. DEMPSTER with Const. J.F. Fyfe, ex-Const. F. Turner and Charles Stewart, an Indian guide, to search for the missing party. Leaving Dawson on the 28 February they covered the route in record time, despite storms and bad weather which cost them valuable time. On 12 March they found a snow covered trail on the Little Wind River, followed it with great difficulty and found the bodies of Fitzgerald and his companions. In a country of hardy men DEMPSTER and his party earned respect for this journey.

William John Duncan “Jack” DEMPSTER, RNWMP Rgt. No. 3193 was born in Wales in 1876. He joined the Force in 1897 and went to the Yukon the same year. By 1911 he was famous as a bushman and a musher. He went on to render outstanding service to the Yukon for a total of 37 years. He retired in 1934 with the rank of Inspector, to Vancouver, B.C. where he died on 25 October 1964.The Dempster Highway—Canada’s first all-weather road to cross the Arctic Circle—was officially opened on Aug. 18th, 1979, at Flat Creek, Yukon. It was touted as a two-lane, gravel-surfaced, all-weather highway that ran 671 kilometres (417 miles) from the Klondike Highway near Dawson City to Fort McPherson and Arctic Red River in the Northwest Territories. It also linked with the Mackenzie Highway at a point 67 km south of Inuvik. The Canadian Armed Forces 1 Combat Engineer Regiment from Chilliwack, B.C., built the two major bridges over the Ogilvie and Eagle Rivers. Ferries handled the traffic at Fort McPherson and Arctic Red River.The highway didn’t look like your average road then, and it doesn’t now. That’s because it’s unique in highway design and construction. It sits on top of a gravel berm to insulate the permafrost in the soil underneath. The thickness of the gravel pad ranges from 1.2 metres up to 2.4 metres in some places (four feet to eight feet). Without the pad, the permafrost would melt and the road would sink into the ground.

The Dempster Highway can be a challenge for some people, but for most visitors it’s the thrill of a lifetime. It’s home to Dall’s sheep, mountain goats, moose, woodland and barren ground caribou, wolves, wolverines, lynx, fox, along with grizzly and black bears, as well as several hundred species of birds-both resident and migratory. The sun shines 24 hours a day there in the summertime. The land around Eagle Plain is a rolling, hilly region that’s covered with stunted black spruce forest. Because of permafrost under the soil, the trees lean in all directions, giving them a comical, drunken appearance. The explosion of colourful Arctic flowers in July can take your breath away. Dramatic views are everywhere, and from just about anywhere you can see forever.

The Dempster Highway may be over 34 years old, but it’s still one of the best-kept secrets of the Yukon.