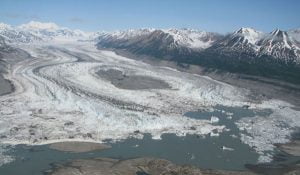 The mighty Yukon River flows northwest over 3300 kilometres (2000 miles) through the Yukon Territory and Alaska before empyting into the Bering Sea. Its immense drainage area of approximately 847,000 square kilometres (327,000 square miles) makes it the second largest river in North America and one of the largest in the world.

Until about 3 million years ago, the river flowed south into the Pacific Ocean. During the first Yukon Ice Age when the southern Yukon was buried under ice, the Yukon River was blocked by glaciers moving in from the east and southeast. An immense lake formed in front of the advancing ice, which eventually reversed the river course, directing it northwest through Alaska.

As the last ice sheets retreated from southern Yukon about ten thousand years ago, a huge lake formed, submerging the Whitehorse area. Thick layers of glacial silt were deposited on the lake bottom. When the ice dam at the head of Lake Lagerge gave way, the cataclysmic force of the draining waters carved through the silts, creating the valley and river channel. The clay escarpment that can be seen along the banks of the Yukon River was once at the bottom of that huge lake.

There are still many glaciers in the Yukon today. Kluane National Park near Haines Junction, Yukon is home to one of the largest non-polar icefields in the world. These glaciers continue to shape the Yukon landscape today by making their own weather, scouring away tons of rock every day, damming rivers and creating lakes.

To learn more about the Yukon’s ice age check out the Yukon Beringia Interpretive Centre in Whitehorse.