“Many years ago, before the white man came into this country, people of the Hän tribe lived at the mouth of the Klondike, where Dawson is situated. Sometimes a member of the tribe would go missing, and it was said another tribe, from the south, was stealing them. One day members of the Hän tribe were at the very top of the hillside at the north end of Dawson, and the other tribe was at the foot of the hill. They were fighting and someone at the top cut down a tree a this started a slide. The rock slide buried and killed all the members of the tribe from the south.” 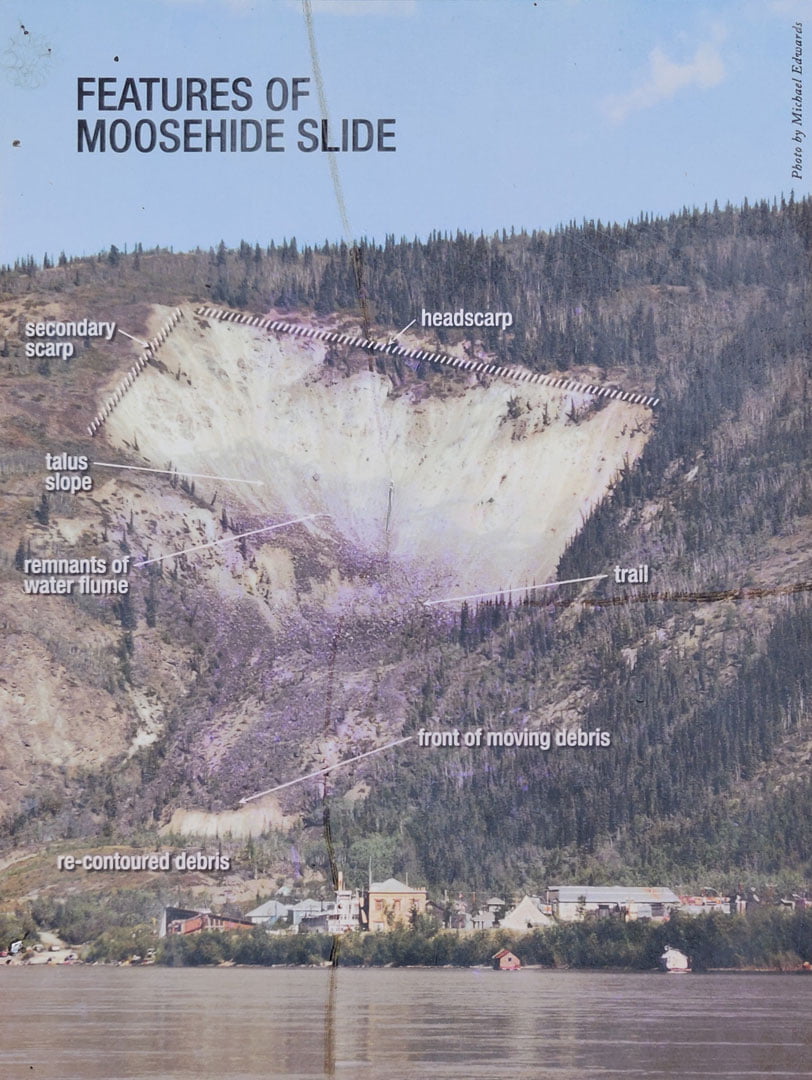 The massive scar on the hillside to the north is a prehistoric landslide, and not the result of mining activity. The Dawson City landslide, known locally as the Moosehide Slide, is a dominant feature of the Dawson cityscape.

In the Hän language the slide is called Ëddhä̀ dä̀dhëchą, literally “weathered moosehide hanging.”The slide, which may be result of two separate geological events, took place at least 1700 years ago.

For centuries, spotting Moosehide Slide has marked the end of the journey for people travelling down the Yukon River to the Klondike. It remains an important landmark for travellers and residents today.

During the goldrush era the landslide deposit and its flanks were temporarily occupied. In about 1908, a flume was built across the slide to transport water from Moosehide Creek; its foundation can be seen to this day. In the late 1970s, the lower part of the landslide deposit was quarried and recontoured.

Above this activity, the rock cliffs spawn occasional rockfall, which has accumulated at the base of the slide. The middle to lower section of the landslide debris is currently moving at a rate of about 4.5 cm per year. The moving debris exhibits traits common to both earth flows and rock glaciers, though neither of these mechanisms is confirmed.

Trenches and tension cracks are evidence of ongoing movement along the edges of the slide. Split trees such as the one pictured indicate the rate of this movement.

Today, the Ninth Avenue Trail winds across the lower edge of the debris field. Above it, a trail popular with summer hikers crosses the slide, providing a scenic view of Dawson. 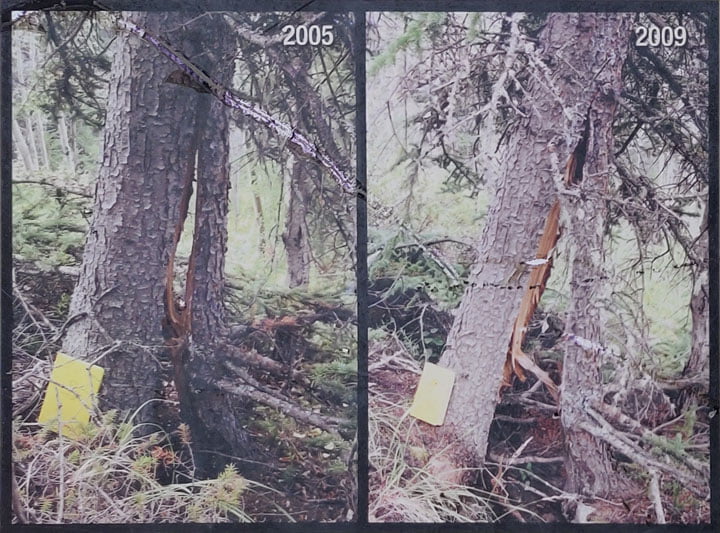 Tension cracks in the ground occur in several places along the edges of the slide. In the four years that elapsed between these photos, one such crack widened the split in the trunk of this tree.