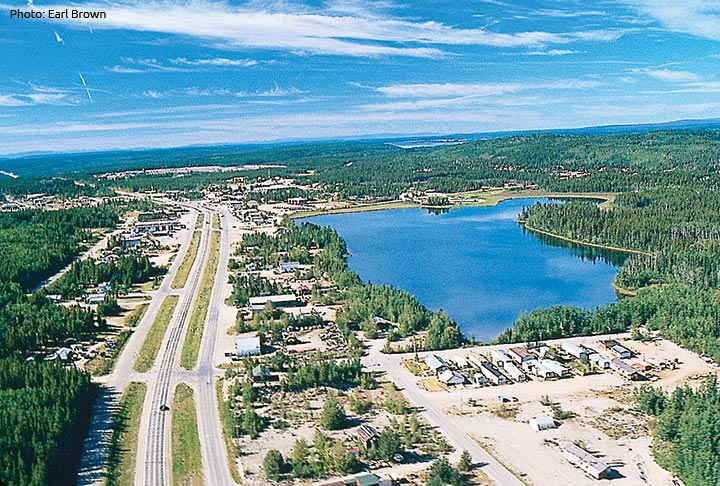 Watson Lake’s name can be traced back to the settlement of an American man named Frank Watson, who left California in 1897 to seek gold in the Klondike. Upon leaving the Klondike, Watson ventured into Kaska territory in the Upper Liard area via northern rivers. History knows him as the first white man to explore the area, and he settled in present-day Watson Lake area and continued life as a prospector and trapper. Today, his children and grandchildren continue to play an important role the Watson Lake community.

It wasn’t until the Alaska Highway project and the construction of a nearby airfield during the late 1930s and early 1940s that the townsite at Watson Lake began to grow. Concerned for Alaska’s security in light of the perceived Japanese threat during the Second World War, the U.S. government commissioned the United States Army Corps Engineers to pave the Alaska Highway, originally called the “Alcan” highway, and create a supply route between Alaska and the lower 48 states. Meanwhile, the Government of Canada built a chain of airfields across the remote northwest, of which the airstrip at Watson Lake was an integral part. Highway planning dictated that the Alaska Highway should service the northwest airfield sites, and with that connection between the highway and the airfields, the town of Watson Lake was born.

Within merely 8 months and 12 days, the Alaska Highway, which had previously been nothing but a rough pioneer trail of 2,450 km (1,522 mi), became a major transportation route that connected northern communities to the south. The Alaska Highway project left behind a permanent settlement and community at Watson Lake, which today serves as a major service area for travelers to and from the Yukon and Alaska, as well as a hub for Yukon mining and logging industries. It is truly the gateway to the Yukon.