The Midnight Dome is a knob of metamorphic rock, common to the area south of the Tintina Trench fault line. The geology of the two edges of the Trench differs greatly due to a slippage of 450 km. that occurred within the last 65 million years. Generally speaking, gold laden placer gravels occur south of the Trench and hardrock deposits of lead, zinc and coal are found on the north side.

In September 1925 a road was built from the graveyards to the Dome, to accommodate the steamboat passengers who arrived on a one-day sightseeing tour. White Pass & Yukon Route donated $500 for the project. The labour was done by members of the Yukon Order of Pioneers who borrowed a Caterpillar tractor and a plough from the City. 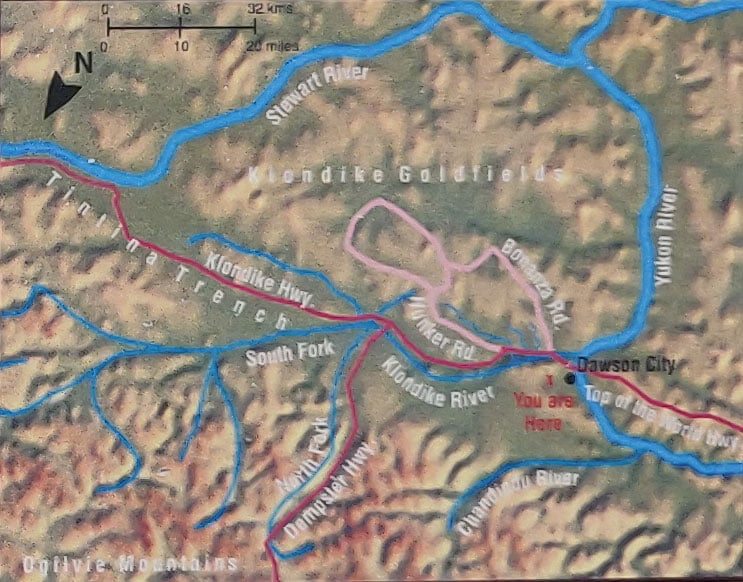 Fertile Island in the Stream

Islands in the Yukon River near Dawson have been used to grow produce and animal fodder since the gold rush. The islands grow or shrink each year, depending on the whim of the river, but the soil is good and their location protects them from early frosts. Sister Island, 3 km down river from Dawson, was donated to the Sister’s of St. Ann around 1900. It provided grazing for the hospital cattle and was a favorite spot for picnics

“What fools we mortals be”.

About 150 people, “many of whom were ladies”, attended the first formal gathering to see the midnight sun on June 21, 1899. Weary mountaineers were greeted with a selection of nuts, candies, cigars and soft drinks at suitably elevated prices. Both the British and American flags were raised and the Ceremony began with a bugle call. The highlight of the evening was a speech by playwright and poet Captain Jack Crawford.

Disappointing the crowd, the sun set one-half hour before midnight and rose two hours later. No one, from this time on, expected to see the midnight sun on the solstice but the Dome remains a popular spot for sightseeing and celebrating the long summer nights.

“There shall be no light here”

As the Dawson population declined, Dawson ministers began holding midnight church services on the Dome. In 1905, Rev. W.H. Barraclough preached from Revelation 22-5. Miss Harold of the Christian Science Society, Professor Trumpour, a visiting Anglican professor from, Vancouver, Archdeacon Shirley of the local Anglican Church, and Rev. Findlay of the United Church of Canada held a Union Service on the Dome in 1925. The ministers may have outnumbered the audience as they preached for half an hour around a small campfire.