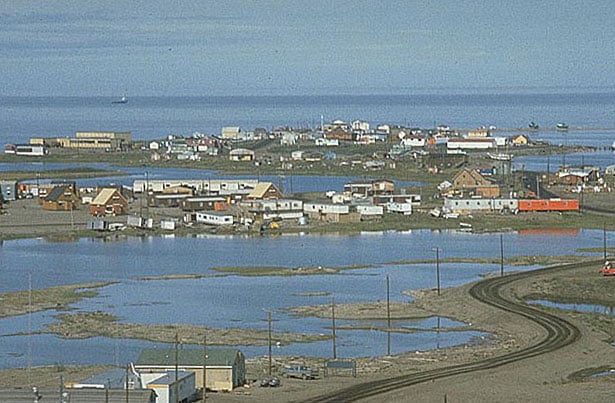 Tuk was once the harvesting site for Tuktu, the caribou. In the past, thousands of Inuvialuit were scattered along the coast from Herschel Island to Cape Bathurst. During the winter from December to March, they gathered at Kittigazuit, 16 miles from Tuk, at the mouth of the East Channel of the Mackenzie River Delta. When there was a need for a suitable harbour for community resupplies for Inuvialuit communities of the area and communities to the east, Tuk was chosen as a sight because of the natural shelter from winds and waves. A Bay trading post was established in 1937. The new community was situated on one of the nicest harbours in the western Arctic.

Pingos, huge ice covered hills, provide a startling backdrop to the community. Formed by a combination of frost and abundant water, pingos are an unusual feature of this coastal area. Numerous pingos surround Tuk. Two of the largest have been used as landmarks by the Inuvialuit for centuries. The proposed Pingo Park is well worth visiting on a local tour.

Tuk is easily accessible by regular flights from Inuvik. From Inuvik, fly out by bush plane to visit an Inuvialuit family camp or to a nearby lodge for great lake trout fishing. Experienced Inuvialuit guides from Tuktoyaktuk offer exclusive polar bear hunts in winter, by dog team.