Skagway, A Land of Timeless Adventure

A place exists in Alaska where the past lives on; where the cries of “gold in the Yukon” still echo from steep canyon walls; where the sounds of barroom pianos and boomtown crowds ring out in the night. A place where the romance and excitement of yesteryear linger around every street corner… every bend in the trail. That place is Skagway… 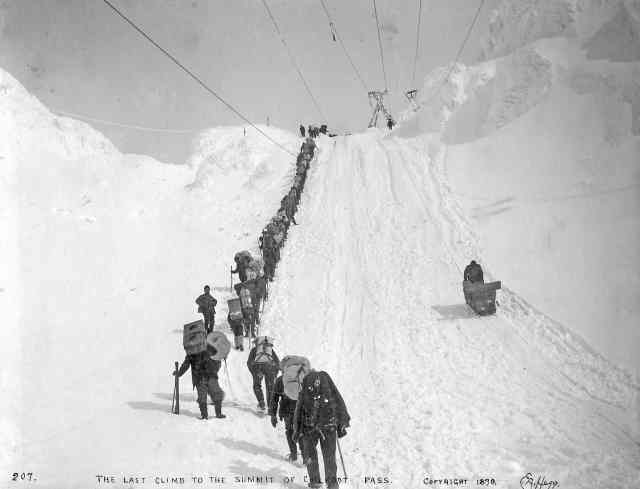 Historic Skagway saw tens of thousands of fortune-seeking prospectors during the great Klondike Gold Rush of 1898. Here, the stampeders piled off steamships, eager to head overland to the Yukon goldfields on the White Pass Trail from Skagway or Chilkoot Trail from nearby Dyea. But before the lonely men could leave town, they faced the temptations of 80 saloons, the lure of painted ladies, and the quick fingers of gamblers and thieves such as Jefferson R. “Soapy” Smith and his ruthless gang.

Foreseeing a lucrative future in the Yukon, a group of British financiers began construction of the narrow-gauge White Pass and Yukon Route Railway in July of 1898. Completed to Whitehorse in 1900, and connecting with a region-wide steamship navigation system, the White Pass Corporation began a transportation network in the North that remains to this day. Skagway boomed during the Gold Rush of 1898, but languished as the rush moved on to Nome in 1899. After the turn of the century many of the businesses moved their buildings from the avenues to front on Broadway and the tracks of the White Pass Railway. The town settled into its ultimate, but less dramatic role as the shipping port for the Yukon. Fire, the scourge of many historic Alaskan towns thankfully never ravaged downtown Skagway, leaving an authentic Gold Rush atmosphere.

We welcome you to take a walk or ride through streets with picturesque, false-fronted buildings and enjoy a community bursting with nature’s beauty and alive with frontier freedom. Our pioneering spirit remains strong. Once you’ve joined us, you’ll be delighted by the unending variety of activities, events, shopping opportunities, side trips and modern accommodations waiting to make your visit unforgettable.