Captain Martin’s Memoirs
Account of the Canadian’s voyage up the Alaska Coast to the Yukon River.
“We ran in a heavy sea (that is for our class of craft) with a stiff westerly, the boats began to waller in the trough, scarcely making any effort to rise, the way they 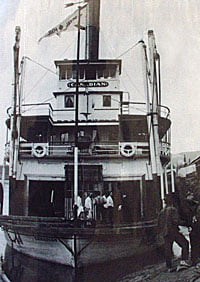 behaved was alarming; we rounded the point of three hill island, our head was now in the direction of the open sea. Water was pouring in everywhere, the stokers were shouting that the fires were going down – losing steam rapidly, with water up to the plates.”

In 1898, at the peak of the Klondike gold rush, the sternwheeler “Canadian” was built in Victoria for the Canadian Development Company. It steamed off to Dawson City, under captain “Paddy” Martin, travelling around the Aleutian Islands then up to the Yukon River.

In 1901, the British Yukon Navigation Company (the River Division of the White Pass and Yukon Route) bought the ship. For the next quarter century, the Canadian travelled the Yukon and Stewart rivers hauling everything from coal to cattle to mining equipment. The Canadian also salvaged or rescued foundered vessels and even excavated parts of the river channel using a special scraper built onto its hull. This versatile and hardworking steamship was nicknamed “The Bull of the Woods.” 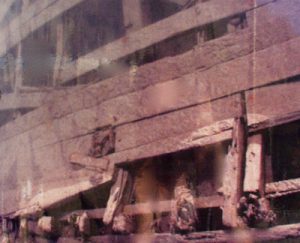 On July 14th, 7:30 p.m. fire discovered on the Canadian in one of the rooms on saloon deck. Alarm was turned in and fire quickly put out. The boat had just come through the Fingers and had to work hard to get through and it is presumed that a live spark had been blown into the room.

After fire damaged its aft section, the Canadian made its last trip upstream to Whitehorse. It was moored above town near the present site of the S.S. Klondike. For three years, children used the boat as a playground and their parents scavenged lumber from the abandoned vessel.

In 1930, the riverbank beside the railway tracks was washing away. The Canadian was deliberately sunk to create a breakwater and prevent further erosion. The boiler, visible during low water, became a familiar landmark to Whitehorse residents. When the roadbed was widened in 1997, it was one of the artifacts salvaged and preserved to commemorate the memory of this hard-working vessel.

Learn more about sternwheelers by visiting Parks Canada’s S.S. Klondike national Historic Site, on the riverbanks of the Yukon River.