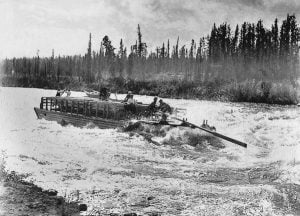 Whitehorse is named after the historic rapids on the Yukon River which resembled the flowing manes of charging white horses. On the “Trail of ’98”, the stampeders had to bypass the treacherous water of Miles Canyon and White Horse Rapids, south of the present city.

The White Horse Rapids became known as the greatest peril on the trail of ’98. The construction of the Whitehorse hydro-electric dam in 1958 tamed Miles Canyon and has replaced the once-foaming White Horse Rapids with Schwatka Lake reservoir.

In 1897, two entrepreneurs capitalized on the obstacles presented by the Canyon and the Rapids by building tramways on either side of the river. For a fee, their horse-drawn tram cars carried goods and small boats around the rapids on log rails. A tent town called Canyon City appeared at the head of the tramway on the east bank. A roadhouse and saloon provided lodging and refreshments to the tens of thousands of gold seekers on their way to the Klondike.

Before the Gold Rush, this area was a First Nations’ campsite. Be sure to visit Canyon City today and take a tour of Miles Canyon where you can easily imagine the gold-filled excitement of the past as you enjoy nature’s treasures of today. In 1900, construction of the White Pass & Yukon Route railway from Skagway to a point past the rapids was completed and Whitehorse came into being at its railhead. Today you can still ride the WP & YR train, the only international narrow gauge operating in North America. Round trip excursions depart from Skagway and there are connections by bus from Whitehorse.

For years, Whitehorse continued its role connecting rail service with riverboat traffic to Dawson. In 1920, the first plane landed. In 1942, thousands of American Army personnel arrived to build the Alaska Highway. In a record breaking 8 months and 23 days, 1534 miles of highway was laid down. The boom ceased by the end of the war, but Whitehorse had become an important centre of communications and transportation. Whitehorse was incorporated as a City in 1950 and in 1953 the capital of the Yukon was transferred from Dawson City to Whitehorse.

Our river may have calmed down a bit since 1898, but our city sure got lively with many events and attractions. We are pleased to welcome you and wish you a golden stay.