In 1895, the North West Mounted Police were assigned the arduous tasks of establishing police detachments, carrying mail and introducing and enforcing law and order in the Yukon Territory. A significant feature in the Yukon’s police history was the dog patrols sent to remote outposts and used to carry the Royal Mail. During February and March 1995, Centennial Patrol retraced the patrol route from Dawson City, Yukon to Fort McPherson, Northwest Territories and back. This Patrol will pay tribute to those historic police patrols made throughout the Yukon’s wilderness. 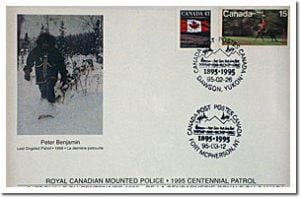 This limited Edition Commemorative Dispatch Envelope was exclusively created by Canada Post for the 1995 R.C.M.P. Yukon Centennial. On February 26th, 1995, Centennial Patrol set out on a treacherous 475 mile journey along the original patrol route from Dawson City via Seela Pass, Hart River, Wind River, Peel River, Caribou Mountain cut-off to Fort McPherson and return. In total, 1000 miles of the most demanding terrain and severe conditions in the world were conquered during the six week expedition. This envelope was carried in the Centennial Patrol’s Official Mail Pouch.

The three dog teams and nine Polaris snowmachines were operated by RCMP personnel and civilians, experienced in the conditions of the trail. It is significant to note that the R.C.M.P.’s tradition of working with First Nations people played an important role in this Centennial Patrol. The team included an Aboriginal Constable, as well as the first female Aboriginal Constable to travel this historic route, and a First Nations dog musher from Fort McPherson, who is a descendant of a Native guide from one of the original Patrols.

Centennial Patrol dedicates more than the 100th Anniversary of the RCMP in the Yukon. The year 1995 marks the 90th anniversary of the first patrol over this route by Constable Mapley, the 75th anniversary of Sergeant Dempster’s 1920 Patrol (to whom the Dempster Highway is dedicated), and the 50th year since the Last Patrol over this particular route by Inspector Forrest in 1945. On a more somber note, Centennial Patrol took place 84 years after the fateful “Lost Patrol” of Inspector Fitzgerald.