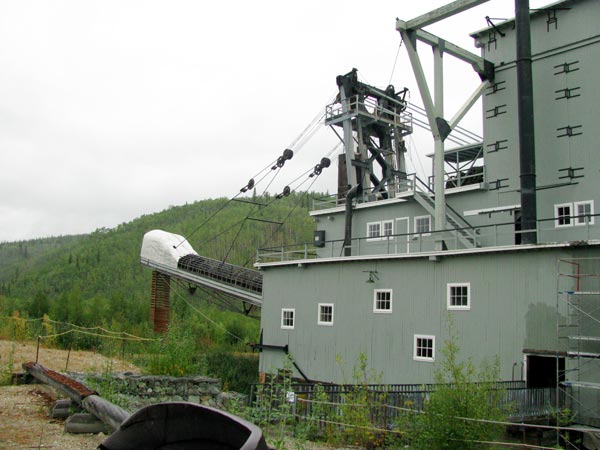 These behemoths roamed the creeks of the Klondike until the early 1960s. Dredge #4 on Bonanza Creek, the largest wooden hull dredge in the world, typifies this legacy. It is a National Historic Site and a must-see attraction in Dawson City. Drive through the goldfields along Bonanza Creek Road for 12.3 km to reach historic Dredge No 4. Summertime tours are available.

What is this thing?

Dredge No 4 was a giant gold digging machine. Imagine this vessel, inching forward, year after year, forever altering the landscape. Dredge No. 4 was the largest wooden-hulled bucket dredge in North America. It was designed by the Marion Steam Shovel Company, and built for the Canadian Klondike Mining Company in 1912. 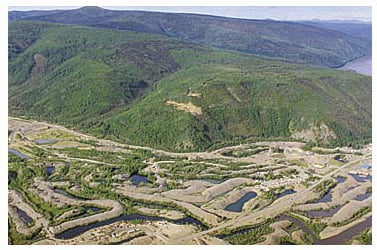 The dredge moved along in a pond of its own making, digging gold bearing gravel at a rate of 22 buckets per minute. It would operate for 24 hours a day for a season of approx 200 days, April – November, depending on the weather. Though only moving forward a half mile per season, it unearthed nine tons of gold, grossing 8.6 million dollars over 46 years. On its best day, it unearthed over 800 ounces. As well as gold, the dredge recovered everything in its path, including some old cured hams thrown down a shaft in days gone by, prehistoric mammoth ivory, and a set of false teeth.

Dredge No 4 is two thirds the size of a football field in length and is eight stories high.

How did it work?

The dredge was powered by electricity. Once in thawed ground, the Spud (anchor) would be lowered and act as a pivot point.

When the dredge had dug to its maximum depth, the spud and digging ladder were lifted and the dredge was winched forward about 10 feet. Imagine the constant deafening noise of metal against metal and gravel.

The ground in front of the Dredge was prepared in advance. Anything in the path of hte dredge was removed, including moss, overburden, and gold rush era remnants. Water cannons would wash away the muck, and the thawing process began. Metal points were driven into the ground by sledgehammer and water sprayed through the hollow tip…this would thaw about 3-4 inches. It took roughly two weeks to thaw 25 feet down. The thawing crews were always wet, and worked through a sea of mosquitoes.

“And up on the bench and hillside claims, miners were forced to sell off promising claims because there was, not enough [water] to make a cup of tea.”

The most important element of Placer mining is water. The Dredge’s demand for water was enormous, for both hydroelectricity, and sluicing. A shortage of water in the Klondike prompted construction to begin on an engineering feat similar in scope to teh Panama Canal. The Yukon Ditch was a system of flumes and trenches providing gravity-fed water to the numerous mining operations on the creeks. Completed by 1909, it brought water to the Klondike Valley from over 70 miles away. A hydroelectric power plant was eventually built on the North Fork of the Klondike River. This brought enough electricity to the valley to power the dredges, as well as the City of Dawson. Citizens would pay their electric bill to the dredge companies.

By 1912 there were over 13 dredges operating in the Klondike. World War 1 brought labour shortages and a decrease in foreign investment. Eventually the two companies were consolidated into the Yukon Consolidated Gold Company or YCGC. The increase in the price of gold to $35 an ounce revived dredging during the depression; however, the Second World War, increased wages, and the fixed price of gold eventually took their toll on profitability, and all dredging activity ceased in 1966. The glory days of dredging (when it was said that the Yukon Territory was run by 3 people: the gold commissioner, the senior RCMP officer, and the manager of YCGC) were over, and silence filled the creeks once again.

Dredge No 4 ceased operations in Nov 1959, after sinking where she sits today. In 1991-92, Parks Canada began extensive restoration on the Dredge, freeing her from 18 feet of ice, silt, and mud. She was excavated, refloated, and relocated to her current setting, where the restoration work continues.